Craig T. White was a special education teacher, coach, and athletic director at Old Mill High School. Throughout his career he personally exhibited, and expected of his athletes, the highest standards of character, integrity, and service to those in need. He was a member of the Broadneck community as well, commuting to Old Mill from his home here on the Peninsula.  Craig lost a heroic battle with a rare melanoma in 2015. During even the worst days of his sickness, he came to work with a smile on his face, gave his coaches and athletes a positive role model to look up to, and always looked for opportunities to help others lighten their load. His legacy lives on in the hearts of all the teachers, coaches, and athletes who are inspired to face every day with the same courage, compassion and joy they saw in Craig during his life. In response to Craig’s shining example, the athletic directors of Anne Arundel County Public Schools commissioned a Craig T. White Sportsmanship and Service Award to be given out by every high school each year.  The teams recognized with this award have demonstrated the same outstanding characteristics of on-field sportsmanship and off-field service that were the cornerstones of Craig’s philosophy.

Led by Coach Tracey Regalbuto and her outstanding staff, the Broadneck Bruins volleyball team finished with a record of 17-3 and won the Anne Arundel County Championship, the 4A East Region Championship, and was the 4A State runner-up. All this success on the court is not, however, the reason that they have been selected as our “Craig T. White Sportsmanship” team of the year.  It was their humble and confident approach to all situations that earned them this distinction.  The class that they demonstrated in both their best moments was no different from their actions following a heartbreaking loss in the State championship match.  They were respectful and graceful in both situations, speaking volumes about the outstanding culture that exists in their program.  They have set an example for all Bruin teams moving forward, and we are very proud of all of their accomplishments. 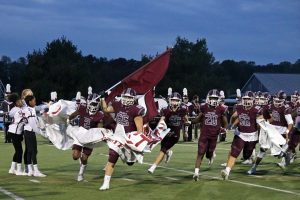