The 2018 Softball team was selected to receive the Sportsmanship Award for their commitment to hospitality and kindness towards their opponents. The girls greeted their opponents before all of their home games and provided them with water and sunflower seeds. The team brings flowers to give to the players celebrating their Senior Nights at other schools and have flowers for the seniors who are visiting when Broadneck hosts their Senior Night. Additionally, they always thank their umpires and go watch baseball when their game is finished. 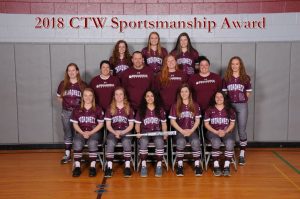 The 2018 Girls Lacrosse team was selected to receive the Service Award because of their comprehensive approach to community service. The team hosts Saturday morning clinics for the Bays lacrosse program and has a team join them on the sidelines of their home games as part of the Building Bruins program. The visiting Bays team gets a personalized letter from a member of the Varsity team, joins the team for pre-game ceremonies and then watches the game from the sidelines. The team also helped provide lunches for the Lighthouse Shelter and dinners for the Ronald McDonald House. They also had almost 100% participation in the Dance-a-thon and were instrumental in helping the fundraiser be so successful. 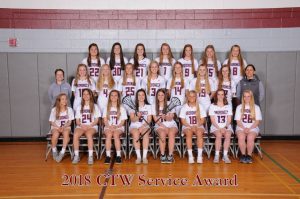