In describing his team, Coach Skrenchuk shared that “The baseball program has developed core principles of respect and sportsmanship toward our opponents, umpires, and the game of baseball. We teach our players to “Control what they can control” which means we do not complain about a bad call, we do not throw our equipment and we play with class. At the end of each game, win or lose we handle ourselves the exact same way. For example, our players remove their hats and say “good game” to their opponent and nothing else is said.  This year we showed support for Northeast High School and their 2 Degree campaign by wearing purple wrist tape when we played them.” 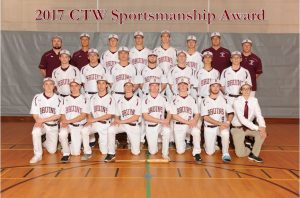 Coach Hamilton shared that “The Broadneck Softball program dedicated themselves to serving the community this season.  Their biggest project was a supply and fundraising drive for the House of Ruth, a battered women’s shelter in Baltimore.  With the help of 24 teams at the District V Showcase, they raised $550 and collected 3 van loads of supplies.  In addition to the drive, the girls participated in the Polar Bear Plunge, stuffed eggs and set up for the Arnold Volunteer Fire Department’s Easter Egg Hunt, and volunteered countless hours with BBSC clinics and practices, which includes being “Big Sisters” to the BBSC 10U and 12U teams. Through all of these projects, the softball team has learned how the power of one small act of kindness can have a profound impact on the lives of others.” 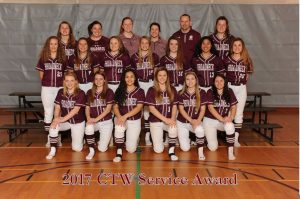