Broadneck High School Boys Soccer has been awarded the Sportsmanship Award in honor of Craig White.  Coach Tettemer bases the soccer program off of respect, sportsmanship and accountability.  When asked by his players, and other student athletes, to describe their season the players had nothing but positive things to say and focused their conversations on the importance of good character at all times.  The players work extremely hard in practice, and even harder in games all while holding each other accountable.  Their games are played in a cool, calm and collected manner.  No goal is over celebrated and the athletes are very respectful to each other, the referees, their coaches and their opponents. The boys soccer players always showed respect toward the other team at the end of the game, regardless of the score.  This season, their coach brought in a military friend, who shined light on the similarities between being in the military, and being on a sports team.  Congratulations to Coach Tettemer and his team! 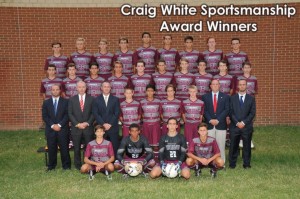 Broadneck High School Girls Lacrosse was awarded the Service Award in honor of Craig White.  This season, the girls lacrosse team plans to get very involved with their community, and supporting people on their team.  The girls have plans to hold a car wash to raise money for the SPCA, and participate in two different run/walks.  They’ll be participating in a Diabetes run in support of one of their own teammates.  In a different run, the team will also be participating with their teammate’s family in honor of a lost love one. Congratulations to Coach Kelley and her team! 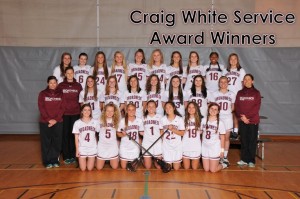